How Authentic Is The H.A.C?

A group of people have formed an organization called “Prosper Whangarei” to promote the construction of a Hundertwasser Art Gallery in Whangarei, They are claiming that the building will be a genuine piece of Hundertwasser achitecture in their publicity, however some vital facts were missing and I think they throw a quite different light on the project. Altho' I greatly admire his work, in my opinion it will never be a genuine piece of Hundertwasser architecture because of the following reasons.

I believe that there are no detailed written or graphic instructions from Hundertwasser for an art gallery/cultural centre in Whangarei apart from a very rough preliminary sketch he made before he died. He usually made more detailed drawings than that for an architect to work on, who then produced under his guidance, a scale model. Also, he often supervised vital elements of its construction and you can really feel his presence in the Kawakawa toilets when you go inside them. They are a wonderful work of art and deserve all the attention they get.

The current proposal is therefore largely guesswork based on a design by the architect Heinz M. Springmann. This is rather like finding a hastily drawn sketch by Picasso and then commissioning another artist to paint it and then promote it as a real Picasso painting. It therefore worries me that the Hundertwasser Gallery will end up like the Emperors new clothes if mistaken claims are made about its authenticity.

Another problem is its location and claims made about the Maori content of the project. It will have a disfunctional relationship to the riverside activities around it and the exterior of the building shows almost no Maori influences in its appearance despite claims about its relevance to Maori culture.

Lastly, I have worries about its structural soundness. It is intended to incorporate two connected buildings, an older one made of plastered bricks and mortar and a more recent one, with concrete floors and a curtain cladding of aluminium and glass. These two odd, earthquake prone bedfellows are about to be covered under a new construction and then disappear from view and carry the considerable weight of a roof garden/park.

If Hundertwasser was alive today most of my objections would probably be overcome. Sadly, he died and took with him the gift that the Whangarei District Council stupidly rejected initially and no amount of window dressing will change that. In my opinion, a better design would have been the Hundertwasser designed New Zealand Art Museum/Gallery that he proposed to be built in Wellington,
Posted by Dave Wolland at 8:32 PM No comments: 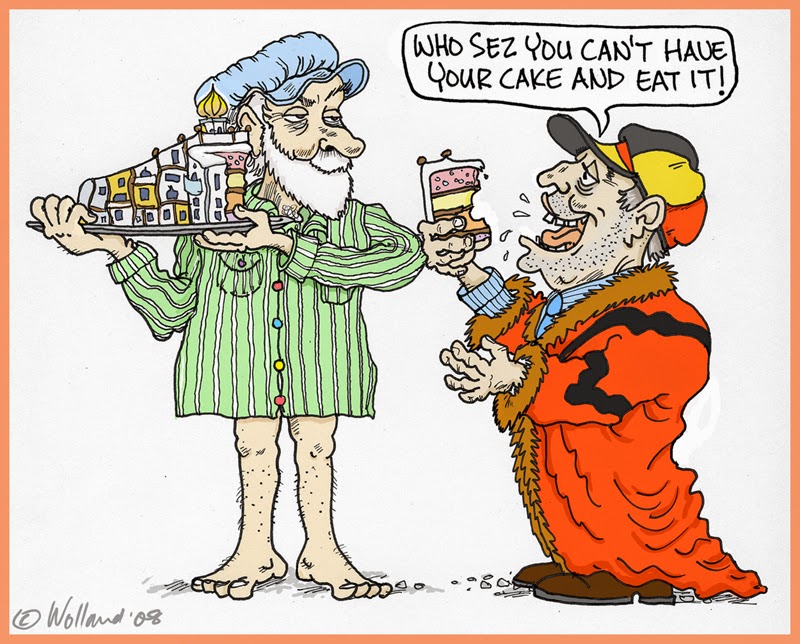 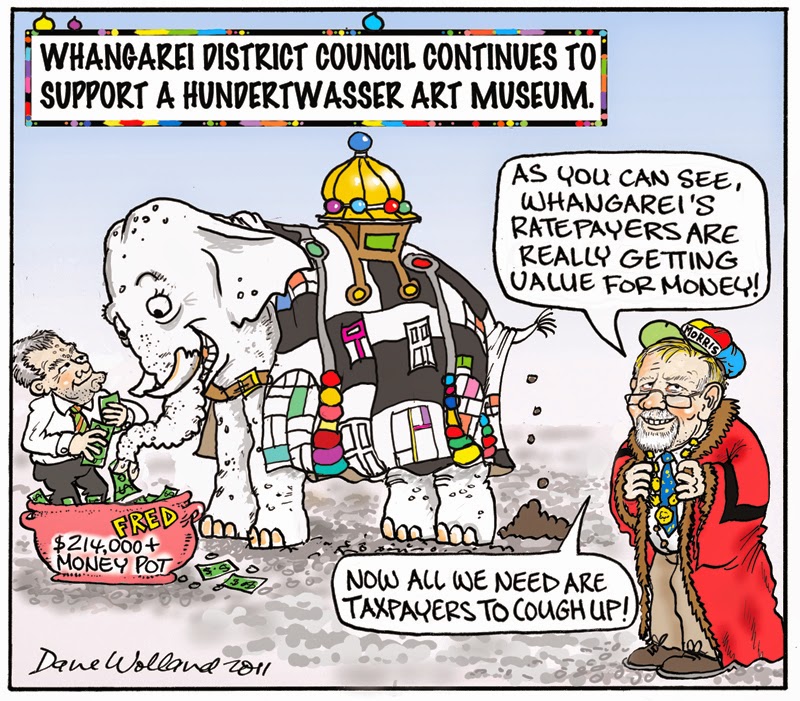 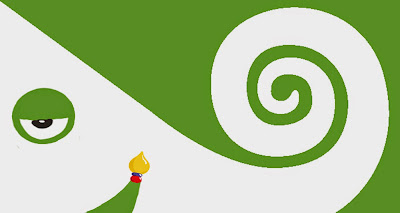 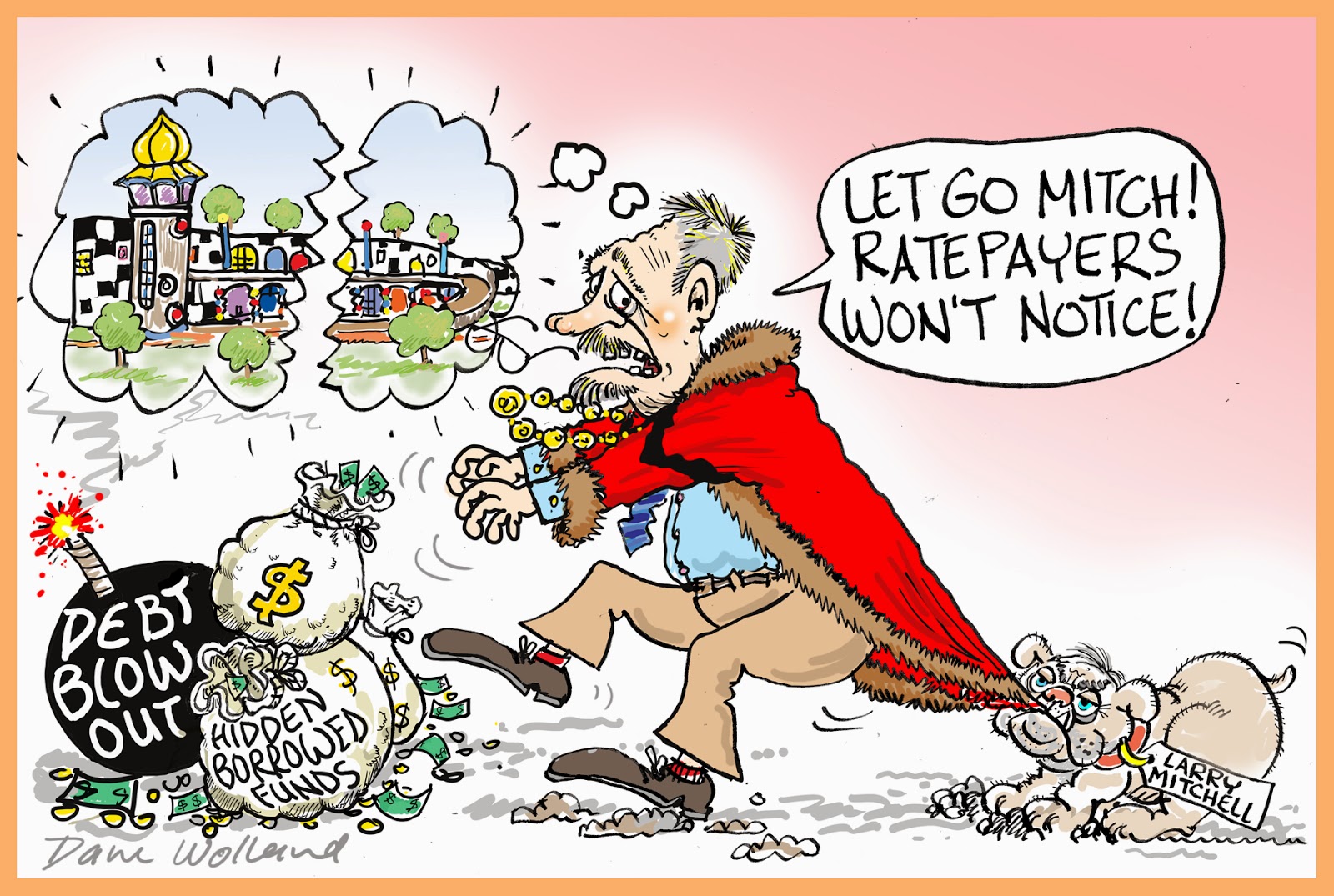 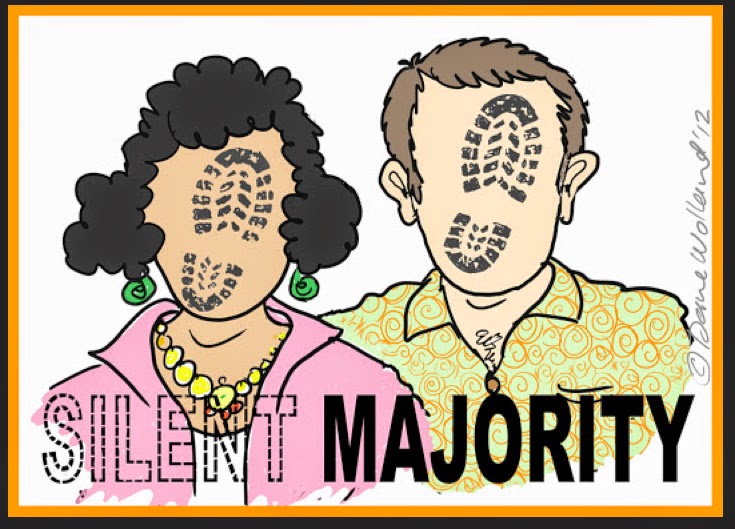 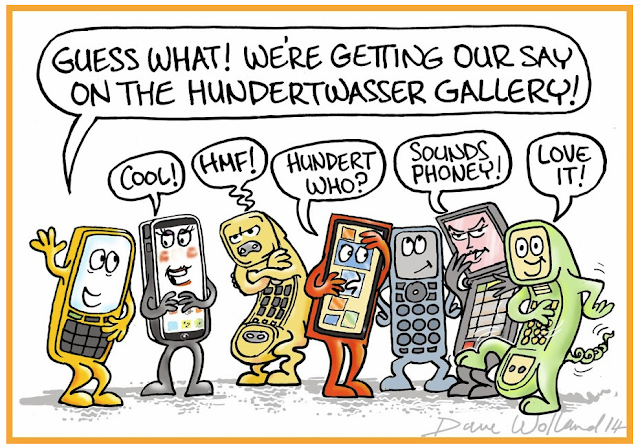 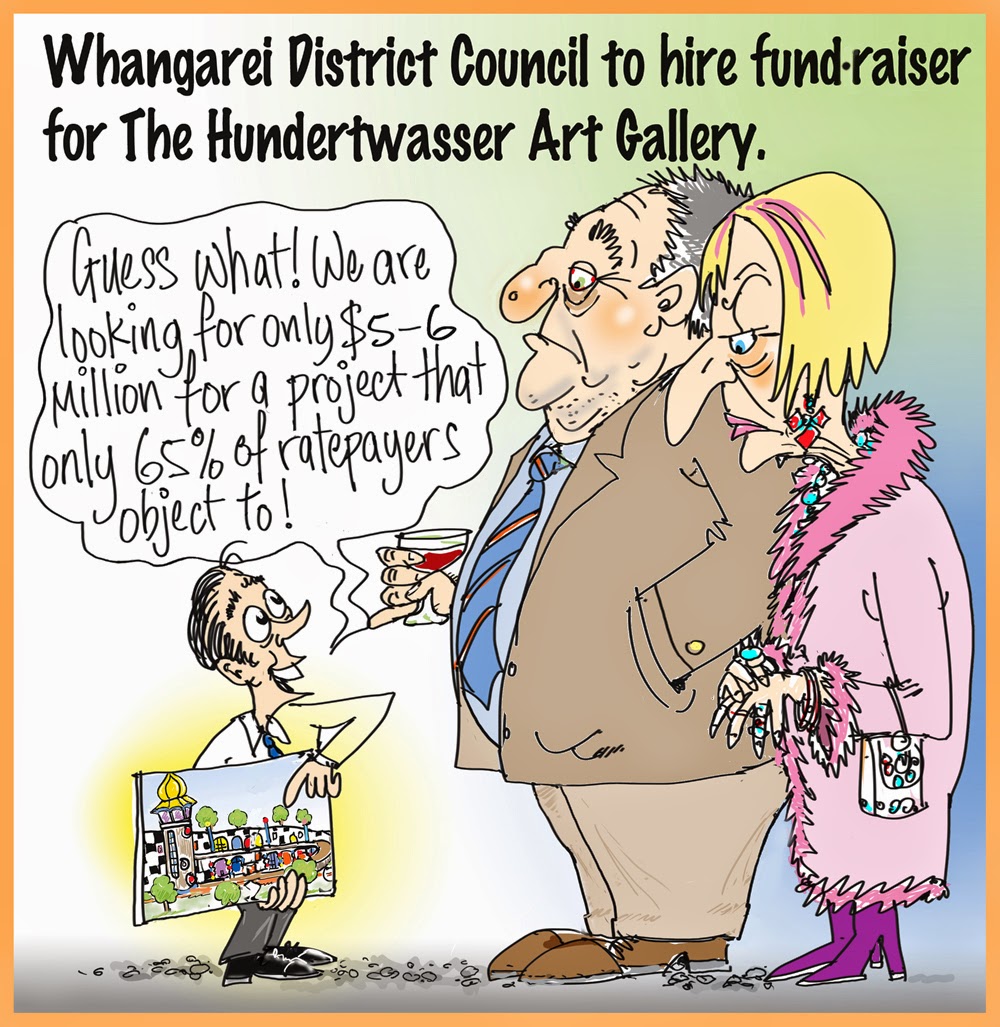 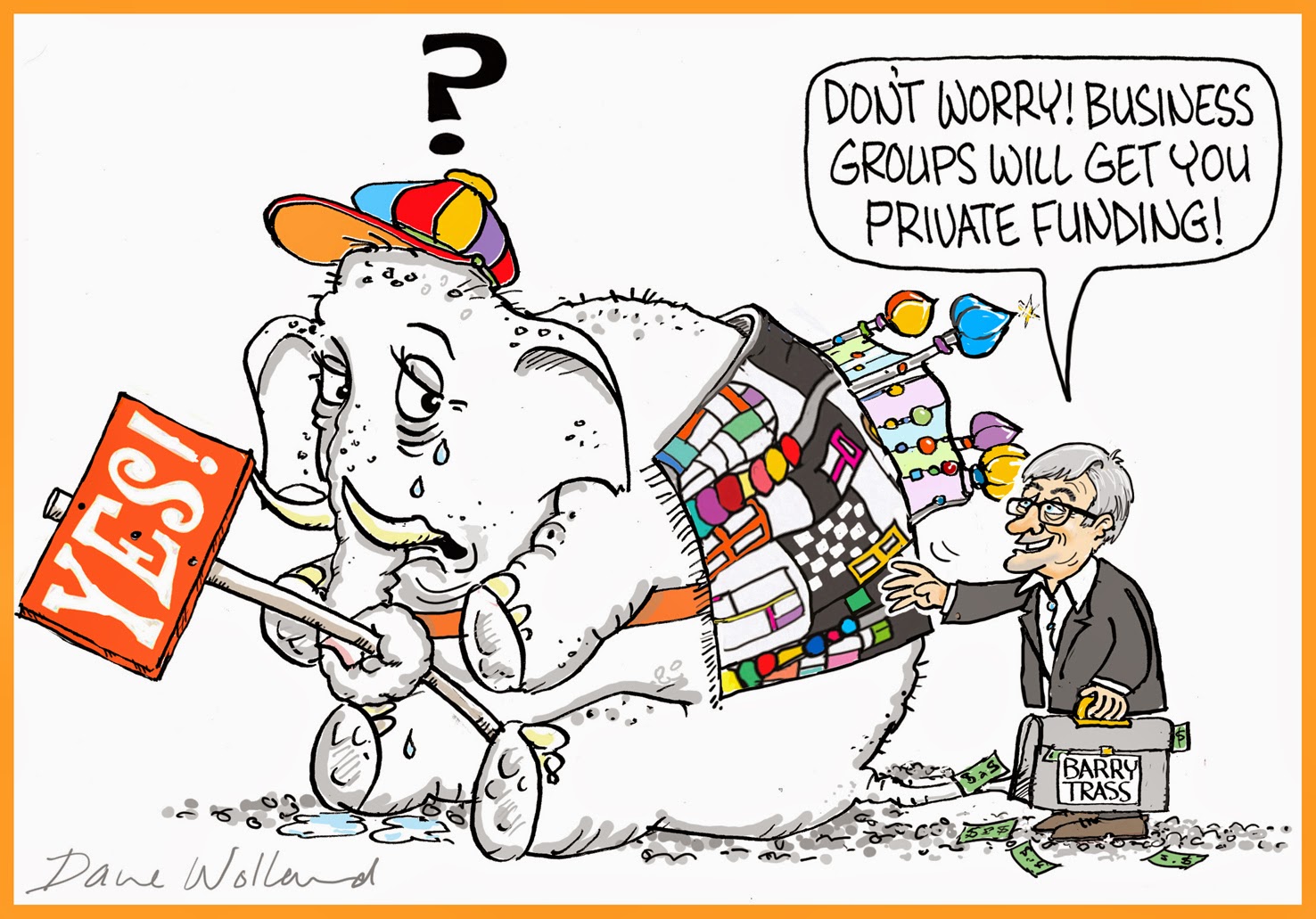 Below is the genuine proposal for a Hundertwasser designed Art Gallery/Museum for NZ in Wellington. All he managed to do for Whangarei was a very roughly sketched idea like the one shown first. 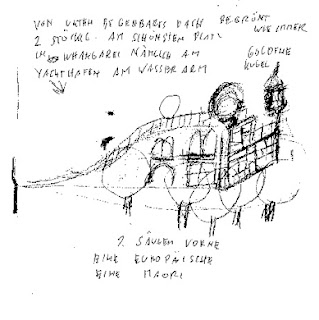 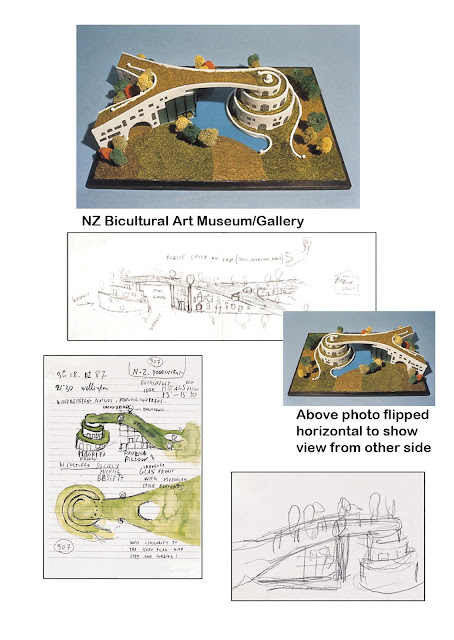 Posted by Dave Wolland at 8:19 PM No comments:

Dave Wolland
I have created a collection of blogs to provide a window on my own work and ideas. You can contact about me these and any other matter at dave.wolland@gmail.com - your comments on each posting are very welcome too. My contact phone number is NZ 09 9727159 or 027 3881488